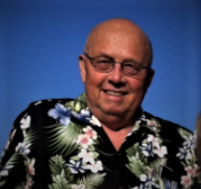 Doug grew up in Anchorage, Alaska. After high school he worked as a plumber and welder in Alaska’s construction industry, and later as a supervisor and safety specialist. He worked at what is now the Agrium fertilizer plant in Nikiski, Alaska from 1969 to 1997. Before he retired in 2011, he worked various construction projects in Alaska’s oil and gas industry.

Doug married Bonnie Mount in 1965 in Anchorage. They were happily married for 55 years. Doug was one of Jehovah’s Witnesses and remained active in the ministry work right up to the end. He enjoyed his dogs, assembling models and was an avid movie buff.

Family and friends are encouraged to share memories and condolences at www.whidbeymemorial.com