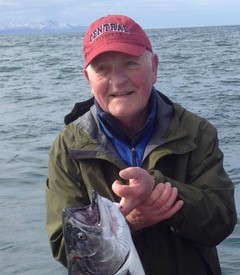 Mike was born in Snohomish, Wash., the son of Karl and Virginia (Bailey) Fankhauser, and graduated from Everett High School with the class of 1953, and a proud member of the 1952 state football championship team.

Mike attended universities of Washington, Western, and Central, and taught in the Highline and Marysville School Districts. He retired in 1990 from Oak Harbor School District after 17 years as orincipal at Oak Harbor Junior High and Middle School. Mike always said he never graduated from the seventh grade. While at the University of Washington, Mike was a member of Sigma Alpha Epsilon fraternity.

While teaching in the Highline School District, Mike was called to active duty in the Air Force during the Cuban Missile Crisis. He was discharged a year later and returned to the classroom.

Mike loved fishing and spent 22 years fishing with his friend, Bud Wallgren, in the Cook Inlet and the Kenai River. Son, Dean, and son-in-law, Rory, joined them for five super years of salmon and halibut fishing. Mike also enjoyed many years crabbing with friend, Don Grate, and fishing in several lakes in Eastern Washington.

He was active within his musical life, singing with the An-O-Chords Barbershop Chorus and two quartets for 22 years. He especially enjoyed the Keep America Singing programs for fourth and fifth grade students in all the school districts in the area.

In 1957, he married Glenda Spaulding and they raised their son, Dean, and daughter, Lynda. The family spent several years at the cabin they built on Lake Kachess in the Cascade Mountains. In 1979, he married Joanne Korengo and they were very active for many years attending Oak Harbor Lutheran Church.

Mike is survived by his wife, Joanne Korengo; son, Dean, of Toppenish; daughter, Lynda Wallgren (Rory), of Oak Harbor; three grand-daughters; three great-grandchildren; and a host of many cousins and wonderful friends.

Services will be held at Oak Harbor Lutheran Church on Saturday, Jan. 18 at 10 a.m.