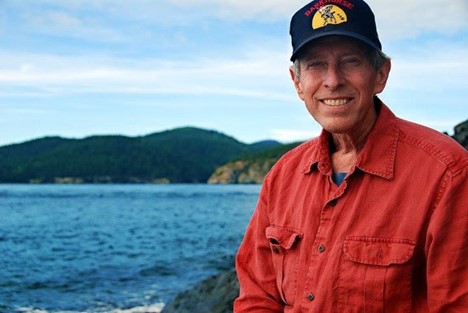 During his time at USAFA, Jim was in the Rebel 11 squadron, played college baseball for two years, and according to Jim “he battled the dean all four years of college.” After his graduation in 1973, Jim traveled all over the country and went to Europe with one of his best friends for two months, before returning to Williams Air Force Base for pilot training. Jim was stationed at McConnell AFB flying the KC-135s, which is where he met his bride of 43 years, Carol. He joked that he joined the Air Force to see the world and he ended up spending most of his career in Wichita, Kan.

Jim and Carol were stationed at Travis AFB, California, the United States Air Force Academy, Colorado and McConnell AFB, Kansas, during his career. During his three years at Travis, AFB, Jim was an instructor pilot, flew worldwide missions, and earned a Master’s in Business Administration. In 1983, Jim transferred to the USAFA, where he was an Air Officer Commanding to Cadet Squadron 28 for two years, was the Chief of Military Training for all 4,400 cadets for two years, and then spent one year as the Airfield Manager while training cadets to fly the T-41’s at the “busiest” airfield in the Air Force at the time. After leaving the USAFA, Jim returned to McConnell AFB to fly the R-Model KC-135’s and was the Flight Commander and Assistant Ops Officer. While flying the KC-135’s, Jim flew worldwide missions and served in Desert Shield and Desert Storm. Jim transferred to the Defense Plant Representative Office at Boeing, Wichita and became the Chief of Program and Technical support and later the Chief of Flight Operations and the Government Flight Rep in charge of all government flying at Boeing, including the 89th Squadron Presidential fleet. Jim retired as a Lt. Colonel in 1995 after 22 ½ years of devoted service to his country.

Jim loved flying so much, he began another career flying for Southwest Airlines, where he had the joy of flying with his wife Carol, who was a flight attendant for Southwest as well. He had the great privilege of flying several groups of World War II veterans on Honor flights. Jim stated he never felt like he was “working” because he loved the culture of Southwest Airlines and flying was his passion. Jim would joke with his passengers and was so loyal to them he even bought food for whole flights of passengers if they were stranded or delayed. He went above and beyond in caring for others. Jim retired from Southwest after 21 years.

Jim was extremely patriotic, humble, had an impeccable work ethic, and was an avid adventurer. He loved fishing, golfing, and anything related to a Datsun 240-Z. Jim brought humor to most everything he did and never complained a day in his life, despite the extreme challenges he experienced with his health. Jim was an avid history buff and loved exploring historical sites across the country. Giving back to the community was important to Jim; he coached softball and baseball, was a Boy Scout leader, headed the United Way campaign for McConnell AFB, and participated in Southwest Airlines Adopt-A-Pilot program for elementary schools in Wichita, Kan.

Jim was the beloved husband and is survived by the great love of his life, Carol (Folks) Scully. They met at a friend’s house and danced to the sounds of the 1976 Worlds Series. Jim and Carol were married in 1977 and loved each other dearly for almost 44 years. They had a passion for anything related to Disney World and were true kids at heart.

Jim was a devoted father and is survived by his daughter, Angel, and her husband, David Rollins; and by his son, Shaun Scully. Jim was so proud of his daughter in her work as an emergency room nursing director and earning her MBA. Jim was equally proud of his son who followed in his steps of serving the country while in the Army, becoming a warrant officer, flying Kiowa helicopters and earning his aviation degree and commercial pilot’s license.

Jim was blessed with, and survived by, his 10 grandchildren who were the joys of his life: Joshua and Lauren Obermeyer; Karson and Xander Rollins; Paige and Ava Scully; Aislinn Nolan; Hayden Scully; Madison Boyzuck; and Trinity Faulkner. He loved spoiling his grandchildren and introduced them to the world of travel and adventure. He loved cooking breakfast and Wok dinner for them and taking them to the beach to search for heart-shaped rocks and shells.

Funeral Mass for Jim will be held Friday, Sept. 17, 2021, at 9 a.m. at the United States Air Force Academy Community Chapel. Military Honors will be rendered. Immediately following Mass, interment will occur at the USAFA Cemetery, where he will be laid to rest among his band of brothers.

In lieu of flowers, Jim’s wish was for donations to be made in his name to The Wounded Warriors Project and St. Jude’s Children’s Research Hospital.