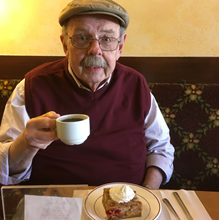 Mr. Gladwell was born in Fort Hancock, N.J., Jan. 8, 1943, to Michael Woodrow and Edith (Karlosky) Gladwell. He graduated from Monterey Union High School in 1961, received his Associate of Arts Degree from Monterey Peninsula College in 1964 and received his Bachelor of Science in 1968. He also attended San Diego State University. He received his teaching Credential in 1982. On July 12, 1986, he married Velma Gladwell. He was preceded in death by his wife, Velma in February, 2015

The couple moved to Clinton in 2005, where he enjoyed watching baseball, reading, cars and guitars. He was a member of the Seattle Section of the Mercedes Club. He loved being a teacher and the kids he taught. He also taught weight watchers for many years and was a life member.