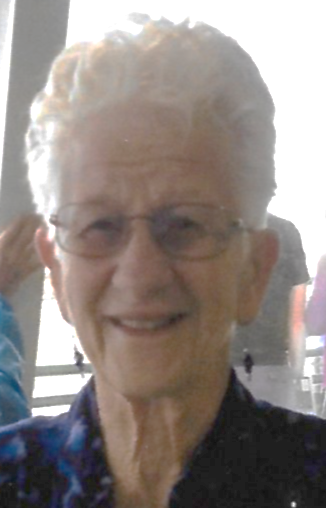 Violet Grace Stewart peacefully went to be with the Lord on Saturday, March 30, 2019 at the age of 90.  She was born to Walter and Matilda Heglin at Big Lake on May 31, 1928. She had two brothers, older brother Warren and younger brother Don, who have both preceded her in death. The family later moved to Anacortes, where Violet grew up and went to school and was fondly known as Gracie. Her childhood home still stands on 24th Street. She has regularly attended the class reunions for Anacortes High School class of 1946, including their 72nd reunion last summer.

Violet was told by her mother that she could not get married until she turned 18, so she obediently waited until after her 18th birthday on May 31 to marry Jerry Stewart on June 1. They were married 62 years before Jerry’s passing in June of 2008. Together they had three children: Rick, Shelley, and Randy.  Jerry’s 20-year Navy career took the family all around the country and overseas twice.  Violet was the epitome of strength as she herded her three kids on our almost annual trek to wherever Dad was transferred next, often leaving her to manage the household and kids for months at a time while he was at sea.

Vi was an excellent cook. She cooked many years at the Sucia Reef in Anacortes and was the first cook at the bowling alley in Anacortes, where her homemade soups and chowder were a hit. She was an avid gardener, having a huge vegetable garden each year that supplied friends and family with veggies for the summer and her yard was always gorgeous with beautiful plants and flowers. Jerry and Vi loved to entertain and loved music. Fond memories include the many barbershop quartet practices in their home and the annual picnic they hosted in their backyard, which included Anochord members and many international barbershop quartets who were scheduled to perform at the annual Anochord summer show and picnic. She loved to bowl, sing, dance (including tap dancing in the kitchen at home while she cooked), annual trips to Hawaii, and giving generously of the love that filled her heart for others. She was strong, kind, determined, an incredibly hard worker, loyal and generous. She was a woman of strong faith and served God and others through her church, singing on the worship team and helping with Sunday morning coffee and wherever else she was needed. We are immensely grateful for her example and the love she expressed to her family. She will be missed incredibly.

She was preceded in death by her husband, Jerry; brothers, Warren Heglin and Donald Heglin, all of Anacortes, and son-in-law Peter Wagner of Mount Vernon.  She is survived by her children, Rick and Gail Stewart of Oak Harbor; Shelley Wagner of Mount Vernon; and Randy and Katha Stewart of Bayview.  She is also survived by grandchildren Jake (Tanya) Stewart; Kelly (Kelly) Stewart; Aaron (Brandi) Wagner; Gabrielle (Eric) Hensyel; Collin Wagner; Rachael (Bob) Wyman Zeinemann; Seth (Tori) Wyman; Tara (Cody) Morrison; and great-grandchildren Connor, Cassidy, Cole, Cori, Juliana, Toby, Aleena, Mattie, Evan, Nathan, Trenton, Natalie, Asa, Ryker, Kya, and August.  We would like to thank the staff at Regency on Whidbey Island and Harbor Care for their amazing care of Mom the past few years.

A service will be held on Saturday, May 11, at 2 p.m. at the Mount Vernon Church of the Nazarene, 2710 E Fir Street, Mount Vernon, with Pastor Troy Johnson officiating. In lieu of flowers, donations can be made to Voices of the Children, a 501(C)(3) non-profit organization in Mount Vernon, started by grandson Aaron Wagner, that connects youth in Skagit County with youth around the world in collaborative arts projects to shine a spotlight on humanitarian crises, encourage community engagement and personal growth. (Voices of the Children, 417 Gates Street STE 2, Mount Vernon, WA 98273)  Family and friends are encouraged to share memories and condolences at www.whidbeymemorial.com.